A Memorial Service at Stanford University Memorial Chapel for the victims of the April 10, 2010, Polish presidential plane crash near Katyń in Russia. 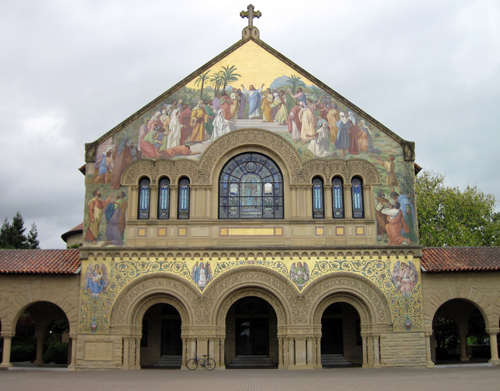 A Memorial Service was held at Stanford University Memorial Chapel for the victims of the April 10, 2010, Polish presidential plane crash near Katyń in Russia.
The plane was carrying the Polish presidential delegation to the 70th anniversary commemoration of the murder of over 20,000 Polish officers and political leaders by the Soviet NKVD in the forest of Katyń.  All 96 persons on board were killed,  including the President of Poland, Prof. Lech Kaczyński  and First Lady, Maria Kaczyńska, top military commanders and political figures, senior clergy, relatives of Katyń victims, presidential security services, and the plane crew.
The Memorial Service was presided over by the Honorary Consul of the Republic of Poland, Tad Taube. It was attended by the President of Stanford University, John Hennessy, director of the Hoover Institution, Richard Sousa, scores of professors, students and members of the local Polish community.  A tribute was given by Prof. Norman Naimark, followed by reflections by Tad Taube and by numerous others mourners.

The tragedy communicated the truth about the horrors of Katyń to the entire world.  The reaction was a global outpouring of sympathy and friendship towards Poland, from Moscow to Washington, from Berlin to Kabul.  We, at USPTC, have been deeply moved by this disaster; it only increased our resolve to continue our mission to strengthen intellectual and economical ties between Poland and the United States.